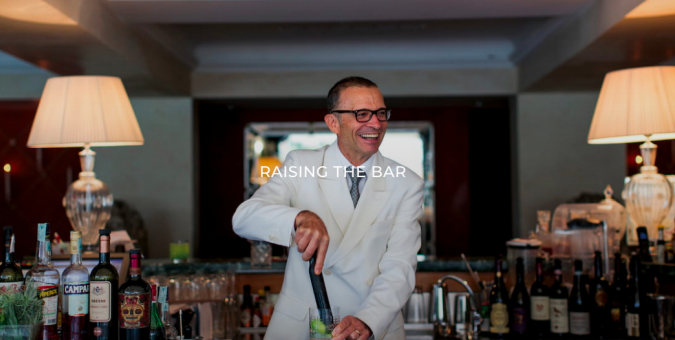 YOU KNOW WHAT’S FUNNY? When Walter Bolzonella was invited to meet Belmond Hotel Cipriani’s revered head barman, to interview for the position of assistant barman back in 1979, he wasn’t interested. A fresh-faced 23-year old, Bolzonella wanted to travel around Europe instead. His exasperated boss at the Cristallo Hotel in Cortina, Italy, said, “You are crazy! Do you know the Cipriani?” “No,” said Walter. So, after hearing about the Hotel Cipriani’s unrivalled international reputation he went to Venice. What’s so pleasing about the story is that thirty-nine years later, Walter is not only the hotel’s head barman—he’s the beating heart of Belmond Hotel Cipriani.

Remarkably, the spry, twinkling Bolzonella has visibly defied the ravages of time. “Everybody is telling me this!” he says, laughing. “Do you want to know the secret? The Cipriani hotel is keeping me young! I enjoy my work and what I’m doing, I do with love. This is very important. And what I love especially are my guests.”

The guests, in turn, love Bolzonella. Over the past decade, he has created not one but two cocktails at the Cipriani with the actor George Clooney; the Buononotte, for Clooney’s film Goodnight and Good Luck, and La Nina, for the star’s mother. Their rapport is such that when Clooney and his then-fiancé, Amal Alamuddin, arrived at the Cipriani before their wedding in 2014, Amal came to see Bolzonella at the bar before the pair went up to their room. “She asks me, ‘Are you Walter? I think you are Walter, because George talks about you.’” Bolzonella is clearly very touched. “This was really wonderful,” he says.

If he’s been asked about his famous guests a hundred times, he doesn’t show it. He is still tickled when recalling the time he served a martini (of sorts) to Elizabeth Taylor’s fluffy white dog, Sugar, on a hot day (the pure water was of course presented to the pup in a Murano glass). On another occasion, a discrete search party was sent to the ladies’ washrooms for Taylor’s famous Krupp Diamond ring; “When she saw her hand without the ring, she became white,” says Bolzonella. The ring was duly recovered.

One could continue: there’s the time Bolzonella mixed bellinis for President Ronald Reagan and personally delivered them to his suite when room service was deemed too great a security risk. When asked about the hotel’s well-known guests, he says that he likes the actor Al Pacino very much: “I find him a very nice person, very human.” But this is the key, with Walter. It’s not about fame or acclaim, as glamorous as these encounters may sound. “With all these important people, everywhere they go on the street they are stopped. And when they arrive at Belmond Hotel Cipriani, they find the privacy. They feel treated like a normal guest. A normal guest means treated good, treated with love. And this is very nice.”

What’s important to Walter is spontaneity—whomever one is serving. It’s not about a stiff, formal hotel welcome, he says; the success of the hotel is its informal luxury. “The Cipriani is, when you enter, welcome with a hug.” It’s about empathy, the kind of understanding that comes naturally after years of doing the work one loves. It’s knowing what kind of drink your guest wants before they do; it’s remembering it’s their birthday at midnight when they’ve forgotten and bringing them a little cake and champagne. No-one wants things to be too perfect, he says. “They want the heart, they want the love. They want you. They want Walter, not a machine. We work all together. The personality is very important.”

But what about when Walter is not at work? What does he love doing away from the bar? Well, when he gets back to his house in the Venetian countryside, he likes to spend time in his garden with a watering can, tending and speaking to the flowers. “It relaxes me!” he says, happily. But of course.