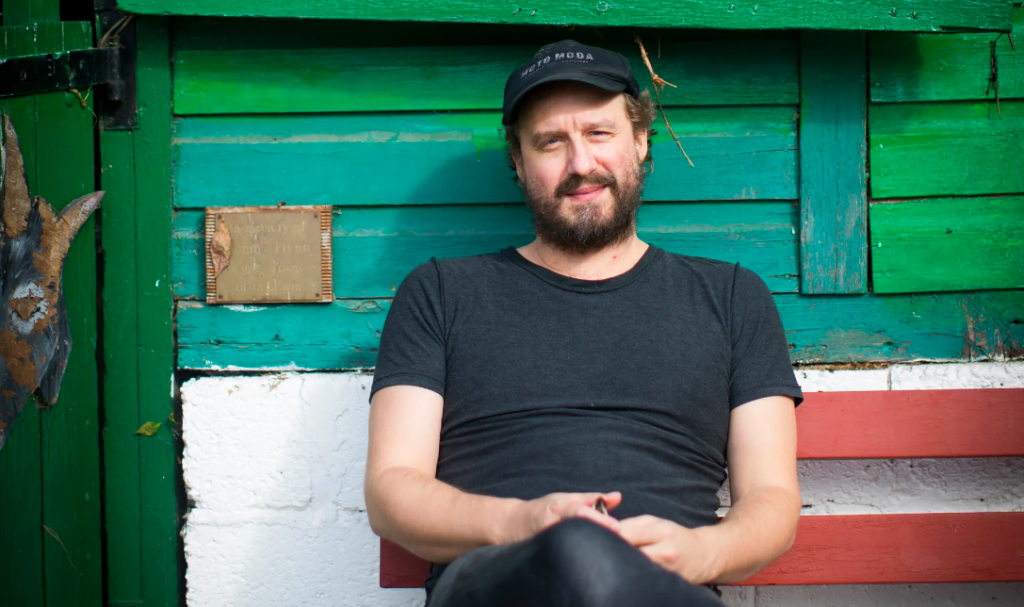 Phosphorescent: ‘Dying is the most normal thing every one of us will do’

Since his last album, the Americana songwriter has had two children and almost died of meningitis. Little wonder he’s confronting his mortality

Eight years ago, Matthew Houck had made some pretty big changes in his life. He’d gone from making cracked, vulnerable songs on his own to playing full-throated, big-hearted Americana, accompanied by an unruly band he described as “a bag of puppies”. Where Houck’s earliest gigs were wobbly affairs in dark basement bars, he was now headlining New York’s Bowery Ballroom. His publicity shots had him in aviator shades riding his motorbike.

During an interview in his Brooklyn warehouse studio at that time, I asked the Alabama-born songwriter where things could possibly go next, imagining some kind of Boogie Nights, drug-fuelled, silk-dressing-gown-wearing manic episode, and he laughed: “Let’s see how weird things can get!”

Today, now 40, Houck is sipping black coffee in the cafe garden at Hackney City Farm, in advance of a secret show in London. Reminded of that day years ago, he laughs and shakes his head. “It got way weirder than that,” he says. There are a few streaks of grey in his beard now, and a softness in his manner that goes beyond the hangover he’s stoically working through.

He lost a relationship and his studio apartment (thugs were hammering on the door every day, he says). Then he subsumed himself in work on a new record: 2013’s Muchacho, which earned tens of millions of streams. Soon after, he met the Australian musician Jo Schornikow, who was playing piano in a Brooklyn bar. “You put your antenna up when you’re working on a project, and things serendipitously fall into place,” Houck says. 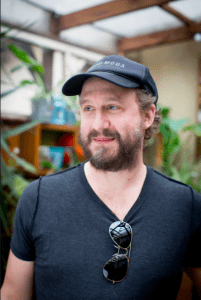 In the five years that followed, Houck has had two children with Schornikow, moved to Nashville, where he handbuilt his own studio and nearly died from meningitis. His seventh album, the aptly titled C’est La Vie, is a career-best: the sound of the unimaginable made real. Houck had once assumed that having kids and some kind of stability would spell the end of his creativity, yet these songs are tender and dazzling.

With its Wurtlizer shimmies, chiming guitars and soulful backing vocals, the single New Birth in New England as good as pulls you on to a uplit dancefloor. An account of Houck and Schornikow’s meeting (the biographical accuracy of which makes Houck “wildly uncomfortable”), it bubbles over with delight. There are quiet moments of wonder, too: My Beautiful Boy is Houck’s late-night lovesong to his son, suggestive of John Lennon’s Beautiful Boy, several scotches in. In pop music, precedence tends to be given to the experiences of youth, with its sweaty extremes and first-time sensuality. The notion that life could get even more mindblowing in adulthood is rarely considered, and yet this is what makes C’est La Vie such a compelling, important record.

Having kids has been revelatory for Houck. “I didn’t have a very good example of family stuff, so it didn’t seem to me that it could be as joyful as it is,” he says. He talks about staying up all night with his little boy, who was unusually chatty and had a fever. Houck describes the experience as “like hanging out with your drunkest friend who is out of control but utterly delightful. I was like, all right man, I’ll sit here with you.”

While a couple of the songs on C’est La Vie have their origins in Houck goofing around with the kids (“tootin’ on a melodica,” for example), writing remains a solitary process. “It takes a long time to get untangled from real life, and enter this space,” he says. “You have to turn off your outside voice, and get inside. So far I haven’t learned to share that space with anyone.”

One thing that has characterised all of Houck’s releases as Phosphorescent, however, is that they’re shot through with longing and melancholy, and for all its newfound buoyancy, C’est La Vie is no exception. The song Christmas Down Under has its narrator beach-bound and bewildered by life, waves of lap-steel guitar framing Houck’s own take on David Byrne’s baffled “How did I get here?”

“When you let yourself love something, the paradox is right there,” says Houck. “I’m devastated that [my children] are going to be gone, and I’m going to be gone, and there’s nothing that you can do about that. This is it: the sadness inherent in everything. The disorientation as well. What are we doing? What is this? It’s kind of inescapable.”

Being hospitalised by meningitis flipped Houck’s worldview, again. “I could’ve died,” he says quietly. “I’ve been lucky in the sense that I’ve had good health my whole life. This was the first time that I was just like, holy shit – in a heartbeat, this is a whole ’nother ballgame.”

For Houck, building his own studio, Spirit Sounds, became part of his process of rehabilitation. It started simply enough, when he stumbled across a 1970s recording console in Nashville two years ago. “I was spending so much time trying to make my records sound like the records that I loved from the late 70s,” he says, “so my idea was, why don’t I just get one of the machines I can do that stuff on? Really naively thinking that it wouldn’t be jumping in way over my head to restore it.” The only place Houck could find for it was a empty warehouse, with no power; again, he thought he could it get up and running in a few weeks, but “ended up on a six-month odyssey of watching [instructional] YouTube videos and running wires.”

Schornikow joked that whether he knew it or not, Houck was working through something. “She said, ‘You wouldn’t make this difficult if you were actually ready to record [laughs].’ And she must be right. I made it excruciatingly difficult, and this record could’ve been made so much more easily. I don’t know if that suffer-for-your-art feeling is something I just can’t shake.”

C’est La Vie closes with Black Waves / Silver Moon, a vast seascape of shifting textures and rippling harmonies: the sound of Houck finally surrendering to these unpredictable tides of life, with a newfound clarity on mortality. “It is at once the most profound and horrifying thing, but it’s also the most normal thing that every single one of us is going to do,” he says. “It’s just such a mindfuck, honestly.”