Part of a year-long series of London Social columns I wrote for Time Out London to support the city’s small, often obscure community groups; other subjects included the Gay Gordons Scottish linedancing club, the Rat & Mouse Society, and the completely inspiring seniors at Age Exchange. 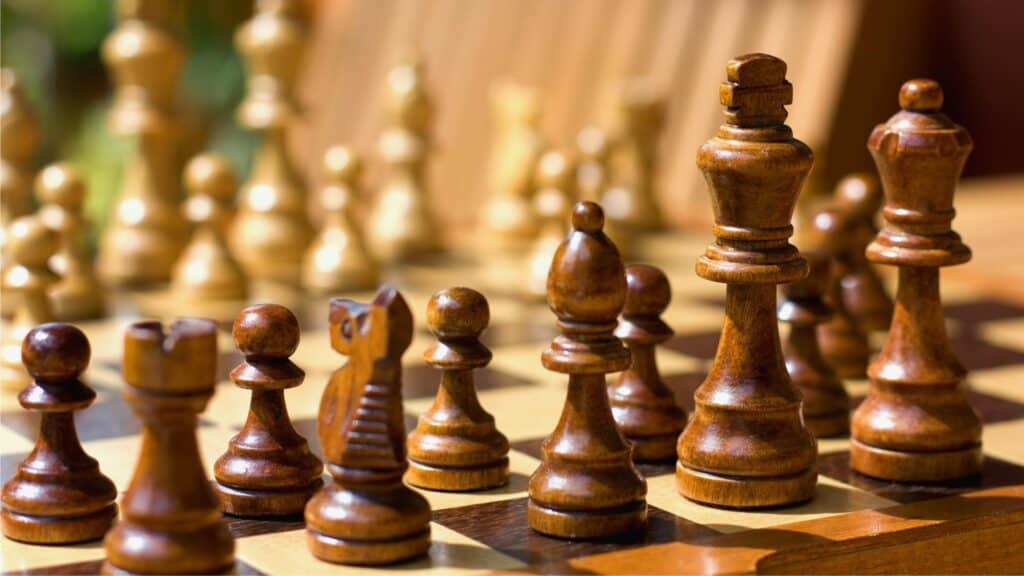 ‘It’s touch move Paul, and you did touch it!’ insists Stanley crossly, on the far side of the room. Paul – in his nineties, and wearing turquoise trousers tucked into leathery moon boots, shifts in his seat. He is irritated, and the way he moves his red plastic bishop across the board is decisive, verging on aggressive. Is it possible to convey stroppiness with a chess piece? The answer is skid-on-plastic yes.

‘We did have one case of chess rage once,’ says Stanley, later. ‘This chap used to play one of our better players, who always used to beat him. And once he went mad and started kicking his bag around. He went to shake this chap’s hand, who’d beat him, and he started gripping it, really hard…’

But for all its gravitas, there is also a Zen-like calm that settles over a chess game like a piece of silk. With its huge rooms and bright sunlight flooding through the windows, the London Jewish Cultural Centre is the perfect venue for distilling such an atmosphere. The building is in fact, prima ballerina Anna Pavlova’s old house, in Golders Green. ‘She danced here, she brought culture here,’ says Joanna Newman, the centre’s director. ‘And we’ve brought life back to the house in exactly the way she would’ve wanted it.’

Given the litany of touchy-feely activities offered by the centre – belly dancing classes, menopause discussion groups and language lessons – it seems just as well that there’s something more likely to appeal to its older visitors. The day we visit chess club, the room is packed with about twenty men, most of whom are sixty-plus, all absorbed in silent combat.

While Herbert, a founder member, is brusquely Dickensian in manner, his octogenarian opponent Joseph, is flamboyant, amused. ‘Chess has got more popular with women,’ he says, in a thick German accent, ‘and now there are grand masters, some of them incredibly beautiful girls.’ ‘Yes,’ says Derek, in a gentle wobble, ‘the Russian, Alexandra somebody, they called her the Pawn Queen. P-A-W-N!’

Derek has been coming here for five years, since he saw an advert in the Jewish chronicle. ‘It was fine, yeah,’ he says, his tone half apologetic, ‘someone took me in and introduced me and gave me a game and that was it.’ Is it, I ask casually, a social thing? ‘Not normally, is it?’ says Derek. ‘One gets to know people in all activities,’ says Herbert. ‘I haven’t actually seen anyone outside, if that’s what you mean,’ says Derek, ‘We come and see each other on Thursdays…’

Okay, I say, but if someone came to chess club and wanted a natter, would that be annoying?
‘We talk a lot, we’re Jews!’ laughs Herbert, leaning back.
‘You can’t stop him, anyway’ grins Derek. ‘I’m sorry,’ retorts Herbert, ‘I’m deaf, I can’t hear you.’
Really, this is a chess circle, says Herbert. Chess clubs are far more serious, you can’t make a sound. ‘Chess clubs have leagues, competitions, ladders,’ he says, ‘and this is for fun, not for blood.’
‘It’s not true though, what he says,’ counters Joseph. ‘You don’t play for fun, you play to win! Chess is war, yes? And chess players are bad losers…’ 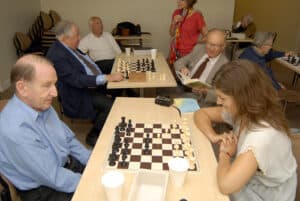 Spend a few hours in a roomful of chess players, and this would seem to be the case. As I settle down to my game with Derek, I hear a hiss of despair behind me: ‘Stupid, stupid, stupid!’. But there are friendly, delicious conversations wafting around, too. Joanna is asking Joseph about his first book – what was it called, she asks? ‘Money, Sex and Chicken Soup,’ he grins proudly, ‘it was about the three most important things in life. Not necessarily in that order.’ Some players are explaining to TO photographer Scott what ‘chollent’ is: ‘Like cassoulet,’ says one; ‘It’s heavy,’ says another; ‘It’s one way of trying to commit suicide’ shrugs Joseph.

I lose, of course, though it must be said that there’s something very satisfying about losing in chess – in check-mate, you are profoundly beaten. Your defeat is so thorough as to be pleasing. It is time now, to defer to the master. To Paul, who has just finished his own game. You command a lot of respect, I say. Are you very good?
‘Well, I used to be when I was younger,’ says Paul in a heavy Russian accent. ‘But young lady, next April 8, I’m going to celebrate my 95 years!’ He looks impressed with himself. ‘I was a very good player when I was 30, 35. But I can’t even remember when I go into the kitchen to pick up something, it takes me five, ten minutes, it takes me, I stay in the kitchen, I forgot why I came.’
Maybe your mind focuses with chess?
‘No, it is just my life experience, my moves are automatic, not because of my memory. I have no memory.’

Paul was born in the Carpathian mountains in the Soviet Union (‘snow and ice all the year round’). ‘We were a very poor family,’ he says, ‘and I was always hungry. I was a boy, 10, 12, and I had nothing to do with myself. So instead of tolerating my hunger, I played chess.’
Is it frustrating to play a weak opponent?
‘Of course if you play with someone who really, he is very stupid, it’s boring,’ says Paul. ‘It’s like taking candy from a little baby. There’s no fun. But with Stanley, I’ve got sometimes to think. He is very dangerous, sometimes. Not always.’

I look to Stanley. He’s in his forties, known here as ‘the kid’ – and a high-flying lawyer, no less. ‘I try to leave this as a slot every week, because it takes you out of things, it’s relaxing,’ he says, ‘and I find it very good tactical training. The idea is to attack and defend at the same time…’

Paul and Stanley begin to set up another game; they will be the last to leave. And for all the squabbles and seriousness, there is something deeply touching about what goes on here, the things that are unsaid. ‘He’s got a Mercedes, you know,’ says Paul, of Stanley. ‘He feels sorry for me in winter, and he drives me home. Apart from that one time -’ he begins. ‘You had your phone switched off!’ tuts Stanley, shaking his head at a pawn. I shake hands with Derek, and leave chess club, feeling like a million dollars. Nice place. 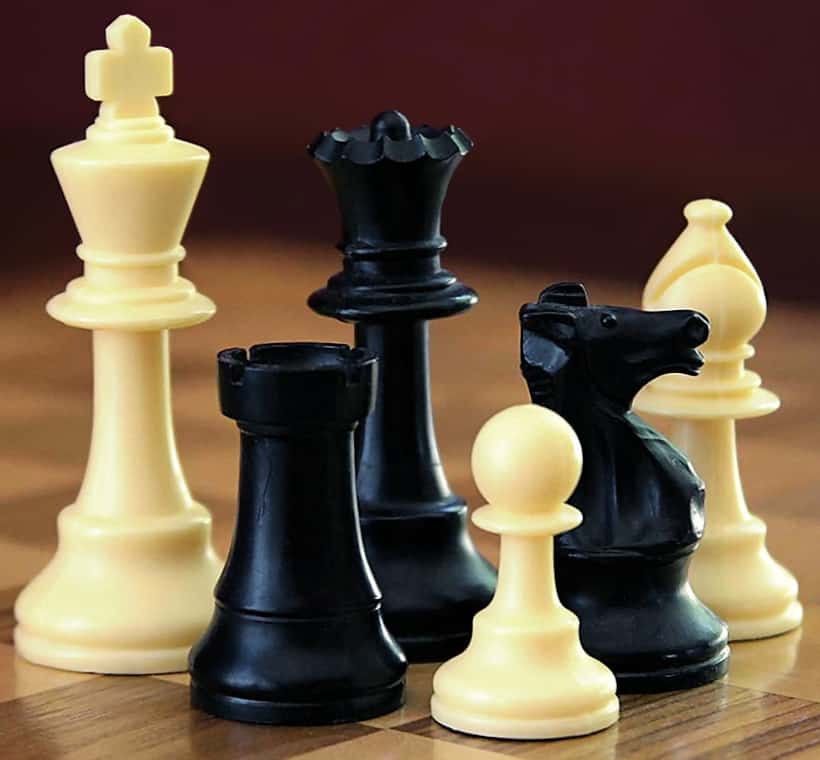 Are there activities? Erm, chess. Chess on black and white boards, red boards, in plastic, in wood – just lots of CHESS.

Fun rating? 10/10 if you fancy a good game, cracking silly jokes, and finding out what life in the Carpathian mountains 100 years ago was like. 0/10 if you’ve got ADD.